How to Convert Your Marketing Content into an Effective Video Script

Creating video for your business starts with an effective video script. Many businesses wish to use their existing marketing content as the basis for video scripts, but don’t know the process required to convert their printed materials into effective video ideas. The script is one of the most important parts of any video production, whether it’s a 30-second commercial or a 60-minute infomercial. Spectrum Video prides itself on being “script to screen,” but we recognize that not every production budget has room for script writing. Here’s how to convert your marketing content into video content.

A brief is a guideline of the information to be presented in a video to accomplish your target objectives. Perhaps the biggest issue with using marketing copy for a video is that some basic questions aren’t answered in a brief.

Perhaps you want the viewer to learn the basics of your business, such as location, products and services or upcoming deals or specials and possibly, a call to action. More importantly, what information do you want the viewers to know that can’t be shown through print advertisements?

Your brand identity is a combination of visible elements that reveal how you want your consumers to perceive your company. Video offers countless opportunities to align with your brand identity such as music, shot sequence, graphics and voice-over actors. Talk to your video production team to explore what options are best for your company. What is your audience’s demographic? Choose on-camera that reflect who you want your consumer to be. Does your business rely heavily on face-to-face interaction? If so, you may want to have employees or managers present the information while dressed in uniform. If your company relies on telecommuting interaction, such as data support, perhaps a voice-over would be more appropriate. How can video interpret your brand image to your viewers?

The video’s medium and where it will be shown should affect how you write your script. A video displayed at a loud trade show should contain subtitles. If you are showing your video on TV, make sure it fits a standard commercial spot length, which are 60, 30, 15 or 10 seconds. Marketing videos for social media should be short in length (10 to 15 seconds) since your audience attention span will most likely be short. Subtitles are a good idea, too, since, according to Digiday, a study from Facebook reported that 85% of videos are watched without sound. How will the viewers be affected by the medium and the medium’s environment when watching your video?

When you have developed ideas for the script, it’s time to begin writing. When writing a script for a business video you want to be clear and concise. If a video production company can take your script and turn it into the video you have in mind, then you’ve accomplished your goal.

Indicate that you’re starting your dialog by first indicating the character’s name and then the dialog that is going to be said.

B-roll footage is additional footage that can be cut away to during scenes with a talking head. (Think the news: While the TV anchor is describing a fire, a video of the fire is being shown.)  First, put the type of shot, such as “FADE IN” or “FADE OUT,” “WIDE SHOT” or “WS” and “CLOSE UP” or “CU.” Then write out the production details.

Any audio effects or music can be written out in all-caps or italicized; as long as each video component is visually distinct from the others on the page.

As you will see, not all scripts look the same. Here the on-screen actor and voice-over are both indicated in all-caps. However, the on-screen dialog is written in quotes, while the voice-over dialog isn’t. View this video here. 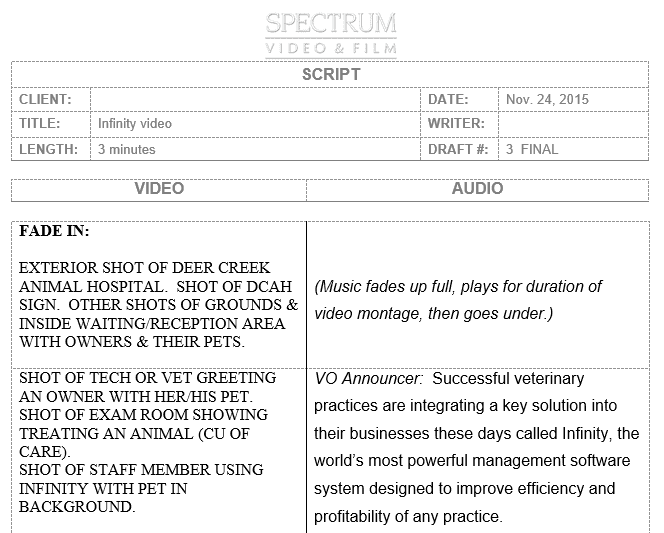 Under video column, the visuals are described in all-caps. Each shot is described in detail and in the order that they need to appear on screen. 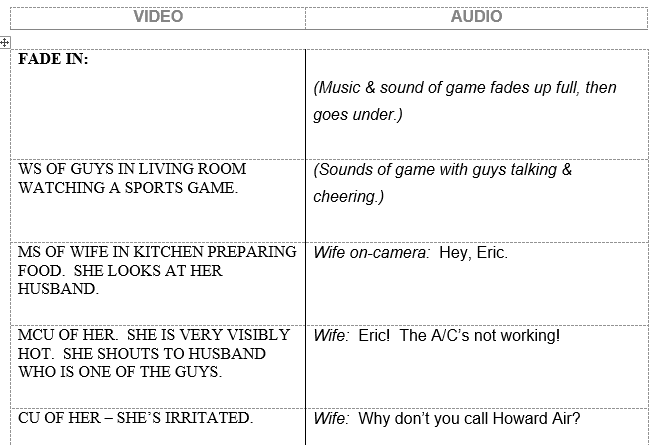 Many businesses believe they can create a video by improvising during shooting, using the print media and perhaps a few bullet points as a guide. Scripting out everything you want to say and show is a much more effective way to make sure your message is clear. This will save time during by not having to redo takes due to lack of clarity about what needs to be presented to the audience.

Reading your script out loud or doing a table-read with everyone involved is a great way to work out potential problems. It’s a “dress rehearsal” of the script and it allows you to hear what it will sound like before it’s committed to video.

A storyboard is a sequence of pictures representing what each shot will look like with audio components described in text. These pictures can be smartphone photos, hand drawings, stock photos or a combination. It doesn’t matter if your storyboard consists of pencil-drawn stick figures, as long as your visual image is portrayed clearly to the crew. 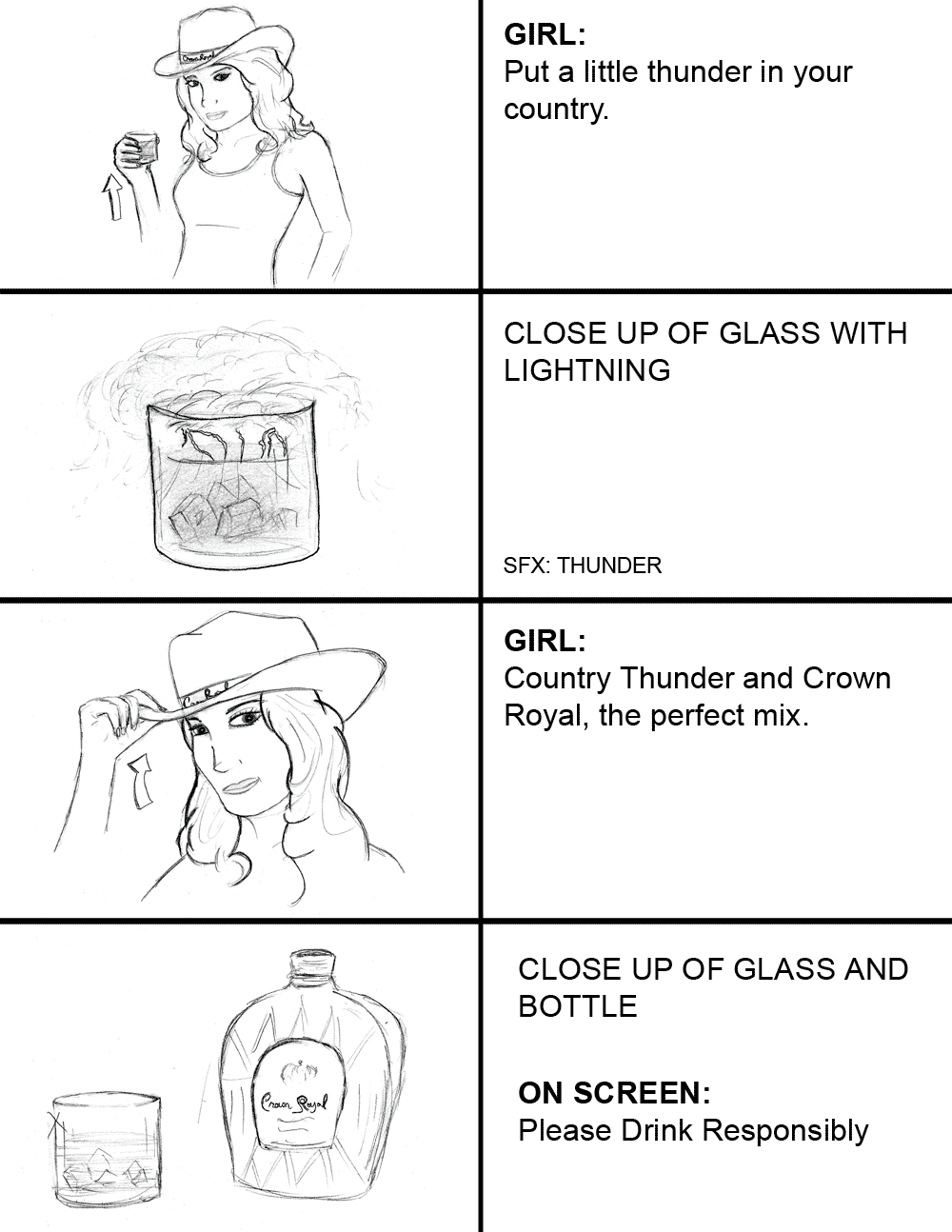 In this storyboard, both audio and visual components are described to the right of the pictures. View this video here.

If you’re wondering how to re-purpose your marketing content into video, remember that video script writing is a creative process, and one size doesn’t fit all. Once your pre-production is complete, consider using Spectrum Video & Film, a full-service production company with more than 30 years of experience, for all your production and post-production needs. With dozens of awards under their belt, Spectrum Video & Film has what it takes to turn your video script into a successful marketing video. Visit us at www.spectrumvideoandfilm.com.